Anybody who’s anybody has heard of Colombian coffee if you haven’t where have you been? Out of all the established coffee growing regions, Colombia is regarded as the world’s largest and the producer of top-notch, high-end Arabic coffee.

But why is this the case? What makes Colombia coffee better than the rest?

If you’ve ever looked down at your morning cup of black gold and pondered what, why, and where your Colombian coffee comes from, this in-depth guide is a must-read. I’m pretty sure I’ve covered all the bases and ticked the boxes of most of the commonly asked questions.

So without further ado let’s dive in. Find out all about this coffee-growing region, learn some essential tips on brewing, roasting, and enjoying the perfect cup.

Coffee in Colombia can be traced back to around the mid 16th century at around the same time that Jesuit priests started arriving in the region from Europe.

The then leaders of Colombia wanted the local farmers to prioritize growing coffee, but, they were met with resistance. The farmers were worried that it takes up to five years for coffee to provide its first crop and understandably they were unsure how they were going to survive during this extended growing period.

A small village priest named Francisco Romero had the imitative to suggest that the farmers plant 3 or 4 coffee trees instead of the usual penance at confession. This took off, and it wasn’t long before the Archbishop of Colombia caught wind of this and thinking it was an excellent idea he ordered everyone to use this penance and it became the general practice.

As you can imagine, this paved the way for Colombia to become one of the world’s largest coffee-producing countries all thanks to the penance of its forefathers.

As demand grew, Colombia started exporting and is 1835 they exported around 2500 bags of coffee to the United States. By 1875 that had increased to a staggering 170,000 bags shipped to the US and parts of Europe. By 1992 coffee exports from Colombia have skyrocketed to over 17,000,000 bags per year.

It probably doesn’t come as much surprise that the coffee industry in Colombia is a booming mega business. They may not be the largest coffee producer in the world with only 12% of the production, which places them behind other top coffee growing regions such as Vietnam and Brazil. But, what Colombia excels at and differentiates them from the competition is their exclusive high-end Arabica coffee beans.

Almost everyone is Colombia has ties to coffee growing, and with over half a million farmers, it’s easy to see why. In fact, it’s the country’s largest source of rural employment. If they’re not doing it, they most likely have a friend or relative that is involved with coffee in some way.

With so much coffee being grown in this region, you would think that it’s produced on a large scale by “mega” corps. Nope. Virtually all of the Colombian beans are grown on small family-owned land with the average plot at around 5 acres in size.

The small coffee-growing plots have been around for generations each typicality owned by a single-family. However, this could all be about to change due to the ever-shifting weather patterns due to climate change.

The worldwide phenomenon of climate change is putting Colombia’s coffee-growing at risk. In fact, it’s one of the most significant threats to the entire industry and not just in Colombia.

The rising temperatures and unpredictable rainfall have had an adverse effect on coffee bean production. Unfortunately, Arabica beans are particularly susceptible to climate change, and with this bean making up the vast majority of Colombia’s production, the future is looking bleak.

Along with climate change comes an increased spread of insects, fungi, and diseases such as “coffee rust (1)” and the “coffee berry borer insect (2)” that are known to be problematic for coffee growers. All of these threats, thanks to climate change, have mutated and are known to spread to higher elevations where they can cause more damage to crops. 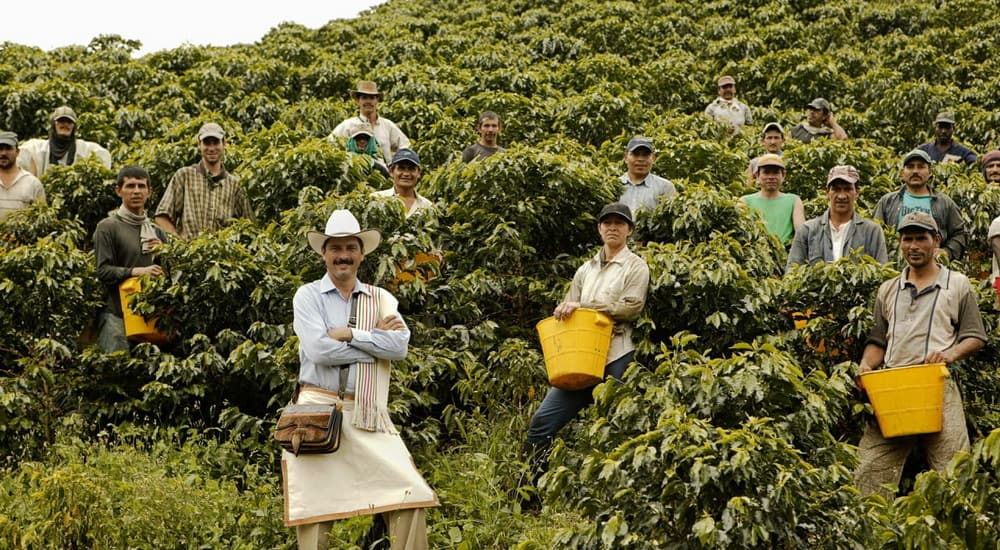 What makes Colombian coffee so special can be pinpointed to where Colombia is located – it’s the perfect geography for growing coffee giving this sensitive crop the optimal conditions to thrive.

The rich flavor profile of this coffee is down to the perfect soil conditions, the right amount of rain (at least 200 centimeters per year) and the climate (temperature never falls below freezing).

Due to the vast growing areas in Colombia, it’s hard to pinpoint a particular flavor profile of this region’s coffee. However, there are dominant flavor notes that are regarded as genuinely Colombian.

Colombian beans can be described as well-balanced and mild with a silky medium body with a clean finish. Typically, acidity levels in these regions coffee are medium to high, which translates to a lively brew.

You can expect subtle floral hints with underlying notes of tropical fruits, red berries coupled with a sweetness on par with sugar cane or caramel. The citrus aromas mixed with hints of spice don’t overpower.

Colombia’s coffee-growing regions can be broken down into two distinct locations:

The vast region around Medellin consists of roughly 14,000 square kilometers and is often referred to as the Colombian coffee-growing axis. The eastern region is located around the cities of Bogotá and Bucaramanga is smaller and a lot more mountainous. 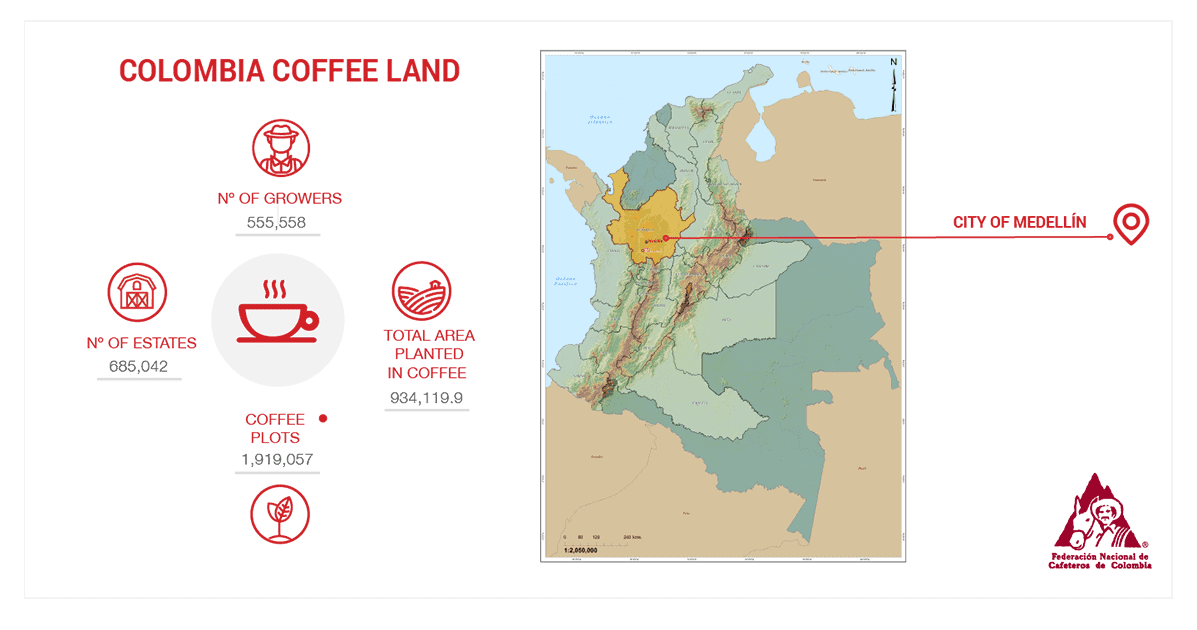 Both of these coffee growing locations have the perfect fertile volcanic soils and high elevations reaching up to 6,400 feet.

Coffee grown in these regions is typically carried out in the shade with the average temperatures reaching 8 to 24 degrees Celsius (46 to 75 degrees Fahrenheit).

Coffee beans grown in the central region are renowned for their rich flavor and heavy body with high acidity. On the other hand, coffee grown in the Bucaramanga region tends to be milder, rich in flavor but still often heavy-bodied. A less acidic coffee can be found growing in the Bogotá region but still holds onto the richness that this coffee is known for.

In Colombia, almost all coffee farmers process their coffee at their facilities.

Colombian Arabica coffee beans are typically wet-processed where water is used to separate the pulp from the cherries. The washed processing works well in most climates and requires less labor and overall monitoring than other processes. This process gives Colombian coffee a cleaner, brighter, and more fruity end product.

However, there are still some producers that opt to use natural methods combined with honey to process their coffee beans (3). This alternative process gives the beans much more sweetness and body due to the fermentation of the fruit left on the beans during drying.

Colombia’s best coffee brands are named after the farming regions where they are grown – Armenia, Medellin, and Manizales. They are all located in the central growing area in Colombia, and you will often find them branded together and marketed under the acronym “MAM.”

Some of the popular coffees from Colombia are listed below.

Where To Buy Colombian Beans?

You simply can’t walk into your local supermarket and pick a bag from the shelf. Well, you can, but it’s not going to be the best tasting Colombian coffee.

That’s why I highly recommend that you order a bag online, which is going to be freshly roasted and truly “Colombian.”

These are two of my personal favorites. 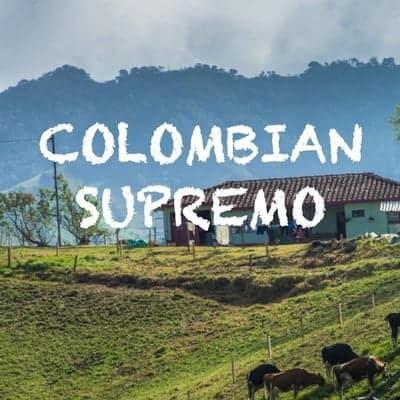 Volcanica’s Supremo has an unmistakable smooth acidity flavor profile that’s loaded with nutty and fruity tones with a hint of fruity floral aromas.

Volcanica’s Supremo is grown in rich volcanic ash at high elevations in the Colombian Andes. Plus, each batch us roasted when you place your order, so you are guaranteed to receive the freshest whole Colombian beans possible. 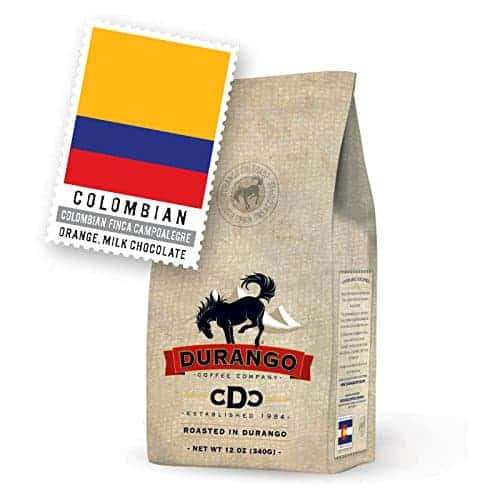 My second recommendation is the Colombian Campoalgre beans that can only be described as brightly sweet and savory. These whole coffee beans are packed with flavor, and you can expect to taste dried apricot, roasted cacao nib, sandalwood combined with a sweetness on par with maple syrup.

The farm is located in the village of Libano which can be found between the central and eastern mountain ranges of Colombia.

What’s the Best Way to Brew Coffee From Colombia?

Now that you’ve picked up a bag or two of some excellent coffee beans, make sure you do those beans justice by brewing them the best way possible.

Espresso: Seeing as these beans are high in acidity and tend to have a mild flavor makes Colombian coffee perfect for use in your espresso machine. The high acidity also pairs well with milk espresso drinks such as Macchiatos and cappuccinos.

Pour Over: You can’t go wrong using Colombian beans in your favorite pour-over coffee brewer. I highly recommend trying with the Chemex or Hario V60.

AeroPress: Sharing similar characteristics with the espresso machine the humble AeroPress is the perfect tool to churn out some great tasting coffee. Fun fact, Bogota, Colombia’s capital, even hosts an annual AeroPress Championship.

How to Brew with a Coffee Sock (Old School Filters!)

Best Instant Coffee For When There Simply Isn’t Enough Time!